Since COVID-19 punched a hole in daily life and the global economy two years ago, the question for economists and those that run economies is how long it would take to recover.

Friday’s figures for GDP growth in 2021 suggest that in the UK at least the worst is over, though that is not to say the future outlook is bright.

Despite a late kick from the Omicron wave and Plan B restrictions that caused a 0.2% contraction in December, figures for the fourth quarter of the year show the economy ended 2021 at about the same size as it was in February 2020.

And looking at the year as a whole, the British economy grew a whopping 7.5%, the fastest on record largely because of the catastrophic 9.4% fall in output in 2020.

The numbers prompted chancellor Rishi Sunak to highlight the resilience of the economy, his wisdom in “getting the big calls right”, and most importantly the £400bn of support that he directed at businesses and households during the course of the pandemic.

All true, up to a point.

Mr Sunak also repeated the claim that the UK had the fastest growing economy in the G7 in 2021, which is true but needs the less-often mentioned context that it had the biggest contraction in 2020. And based on figures for the third quarter of last year, Britain’s growth is ranked only fifth.

What matters to most people is not squabbling over figures but what they mean for household incomes, and the gap between economic theory and the reality is never more sharply felt than when times are hard.

For while the chancellor may be able to hope that the worst of COVID may be in the past for the economy, the year ahead looks grim for family budgets.

Inflation is rampant and will nudge 7%, according to the Bank of England.

Energy prices are soaring more than 50% and the UK faces a partly self-inflicted labour shortage as the jobs market adjusts to Brexit.

Despite these pressures, Mr Sunak has pressed ahead with a 10% increase in National Insurance (NI) contributions to fund health and social care while freezing income tax thresholds.

Speaking to Sky News, he defended the NI rise as the only way of “fixing” social care and clearing the NHS backlog.

“Those are huge challenges and the only way to do that is to provide significant funding. It would be wrong and irresponsible and dishonest, actually, of me to say that we can fix those problems without putting in more funding. Anyone who says you can isn’t being straight to the British people.” 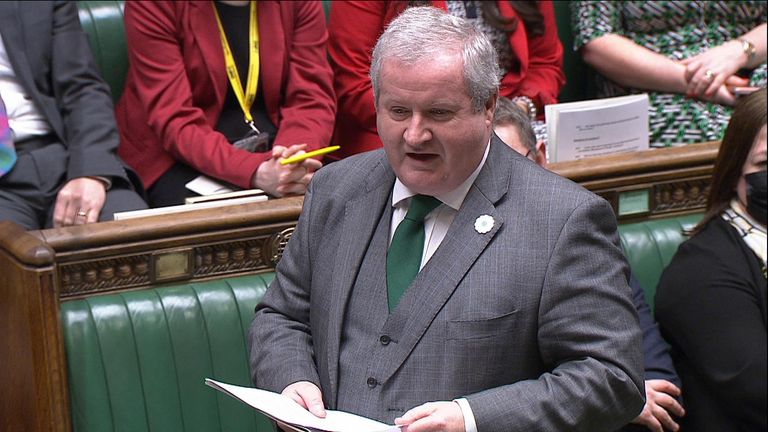 He was much less enthusiastic about engaging with the issue of wages, which are falling behind steep consumer inflation and contributing to a record squeeze on real living standards.

Last week, the governor of the Bank of England said employees should show restraint in pay demands to help prevent triggering a domestic inflationary spiral that could persist long after international factors, such as wholesale gas prices, abate.

“I don’t think it’s the government’s role to get involved in conversations between private businesses and their employees about their wages,” the chancellor said. “I just don’t think that’s what a government in this day and age should be doing.”

His answer makes political sense – no potential PM wants to be heard telling people their wages should rise less than the cost of living – but the economic rationale is less obvious.

Indeed his deputy Simon Clarke, chief secretary to the Treasury, said earlier this week that everyone – employers and employees – had a duty to suppress inflation by holding prices, profits and wages down.

As for his next job, Mr Sunak tried not to further stir an already febrile atmosphere in Westminster.

He says he is yet to receive a questionnaire about potential lockdown breaches from the Metropolitan Police, does not expect to, and doesn’t believe he broke any rules.

As for whether the prime minister retains his confidence, he said only that he “has my total support”.

The meaning of which, as with the economic data, depends on how you choose to interpret it.

Listen and subscribe to The Ian King Business Podcast here

Why Is Education Important