Bruised, battered and battle-hardened, Boris Johnson knows from recent experience that Prime Minister’s Questions is something to endure not enjoy.

He has survived four brutal sessions so far this year, facing multiple calls for his resignation, the defection of one of his own MPs to Labour, and David Davis’ savage call for the PM to “in the name of God, go”.

Yet Mr Johnson remains in his job with an immediate challenge to his leadership now looking unlikely.

Until the Metropolitan Police finish their investigation into 12 alleged rule-breaking events in Downing Street and Whitehall – which could take months – it is hard to work out what further revelation could prove terminal for Mr Johnson’s political career.

The drip-drip of stories continues today with new reports suggesting the PM attended a party in his No 10 flat in contravention of COVID rules, and also went to leaving events for staff. Downing Street has refused to comment on the allegations.

At midday, Keir Starmer is expected to continue his run of quizzing Mr Johnson about the ‘partygate’ scandal. All but one of Sir Keir’s 18 questions across three PMQs sessions this year have been on the topic.

The Labour leader may want to ask if the prime minister attended an alleged party at his own flat on 13 November 2020, the day his former chief adviser Dominic Cummings left government. This is the event where Abba’s The Winner Takes All was played according to reports.

Sir Keir could also ask for assurances that further details of civil servant Sue Gray’s investigation findings will be published once the Met Police have finished their own work.

Labour’s strategy is to “punch the bruise” according to one senior source. But with Ukraine and the cost of living rising up the news agenda, the party’s singular focus on government rule-breaking may soon lose its bite.

“If I was advising Keir Starmer I would very much stick on the big themes: prosecuting those big arguments about the prime minister’s character and his conduct,” said former Labour adviser Ayesha Hazarika, author of Punch and Judy Politics, a guide to PMQs.

“I think we’re going to see Boris Johnson continuing his strategy of doubling down. Boris Johnson goes on the offensive to be defensive. That’s his game… to come out and attack.” 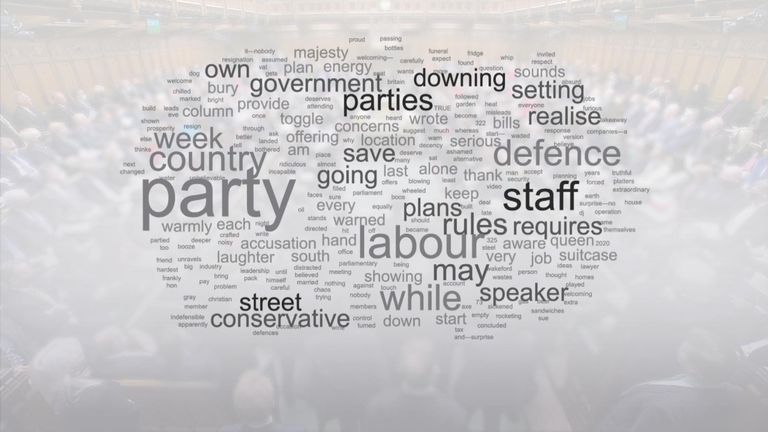 Sky News analysis of each leader’s language in recent weeks shows that in mid-January, Keir Starmer repeatedly focussed on staff parties at Downing Street, before switching the following week to the involvement of the police and Sue Gray’s report.

In contrast the Prime Minister at first conceded he had listened and it was right there was an inquiry, but later concentrated on what his government was doing for the country.

There are two key audiences at PMQs: the voters watching or listening at home, and the MPs sitting behind each leader.

So far this year the number of interruptions as recorded by the official Hansard report has varied wildly: in three of the last four PMQs there were just six or seven moments where proceedings were interrupted by the Speaker or by noise.

But on 19 January there were a total of 17 interruptions: that was the day a Tory MP Christian Wakeford defected to Labour and David Davis delivered his devastating intervention.

With much of British politics tightly controlled, Prime Minister’s Questions remains a moment of high risk and high drama for both sides: 30 minutes of questions where reputations can be created and destroyed.

Boris Johnson will be hoping today will be one of the last times has has to answer questions about lockdown-breaking parties in No 10. By the look of this morning’s newspapers, that seems wishful thinking.