The audience inside the Chamber and out was enthralled. The actor-turned-president summoned lines from William Shakespeare, weaponising the Bard’s most famous verse.

His stage: the theatre of war. The backdrop: a looming tragedy.

But the power of President Zelenskyy’s speech to the House of Commons today lay in a story that does not yet have an ending – like all the best performers, he left them wanting more.

There was not an MP who did not express sympathy for the Ukrainian president afterwards or express a desire to do more. The prime minister obliged.

Zelenskyy tells MPs: We will not give up

Working in concert with the United States, today Mr Johnson announced Britain would ban the use of Russian oil by the year’s end. Another step to pressure President Putin.

But, also another enormous geopolitical shift, the ramifications of which will take months to play out, starting with diesel costs and feeding through into inflation.

Some 8% of British oil comes from Russia. Even advocates of further action admit there is a price tag to acting now, which – they insist – is worth paying now.

Tom Tugendhat, Tory chair of the Foreign Affairs Select Committee, told me the only choice is whether to pay the price of Russia’s action now or later.

“We either pay it now by dealing with the threat that Russia poses and the reality that there’s going to be a serious squeeze in energy prices, they’re going to rise,” he said.

“And that’s going to knock onto food prices and other prices too. The alternative is we ride it out and wait until we’re more vulnerable.”

Ukraine war to push up cost of living even further

Polling by YouGov suggests the British believe this point more than any other major European nation. They are more willing to see the cost of living increase, energy bills rise and taxes go up to fight President Putin than France, Germany and Italy.

The question is whether that remains true when the bills become due.

We may not have to wait long. The scale of the price tag could start to clarify on 23 March, the day Rishi Sunak must deliver the Spring Statement, alongside the latest forecasts for the Office for Budget Responsibility. Ukraine war: What happened on day 13?

With rising inflation likely to exceed 8% and spiking costs to pay for UK debt, the outlook was already grim before the war in Ukraine.

Think tank the Resolution Foundation says households are facing the biggest fall in living standards for half a century as the Russia crisis combines with April rises in National Insurance and council tax.

As it stands, Mr Sunak looks likely to try and help those at the lowest end of the income scale.

Torsten Bell, head of the Resolution Foundation, told me: “The crisis in Ukraine is leading to a further increase in prices and that could lead household income to fall by a further £1,000 next year.

“That’s the kind of fall we only usually see in recessions. So, the question for the chancellor is against that backdrop what does he want to do in his Spring Statement?

“The most obvious answers are action on the benefits system – further increases in benefit levels in April – or looking at energy bills and energy levels and moving some of those around.” 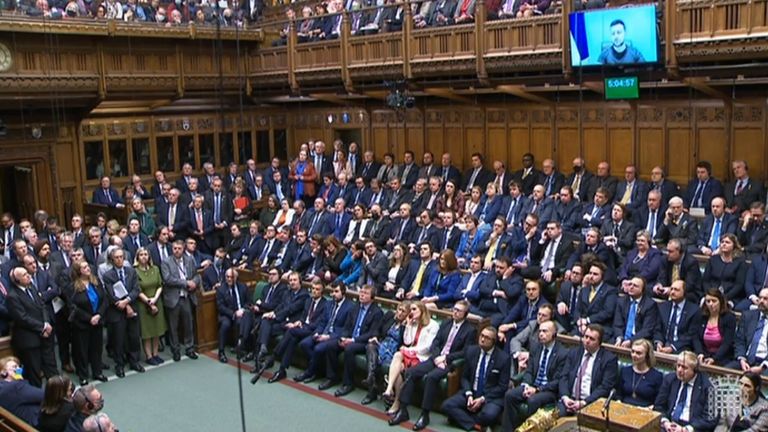 At some point, however, the attention of Tory MPs is likely to return to the 0.5% rise in employer and employee National Insurance, which will hit people’s pay packets in May.

Increased revenues in the first few months mean that, should he choose to, Mr Sunak could afford a one year delay to the National Insurance rise – a path advocated by Tory head of the Treasury Select Committee Mel Stride.

However, despite advocates also including Lord Frost, Mr Johnson’s former adviser, time is running out to stop that change coming in.

Mr Bell told me it was “almost too late” to change the NI rise since IT systems have now been programmed to collect the additional tax in time for the start of the new tax year.

The Tory MPs who are plotting an eleventh hour bid to stop this being introduced do not have long.